A PHP Error was encountered

Message: Trying to get property of non-object

With a true understanding of global changes, especially the mounting threat of colonialism in Asia, King Chulalongkorn’s early initiative was the reorganization of the kingdom’s administration, not only for the central government in Bangkok, but also the administration of the provinces. In 1874, he established the Council of State, together with the Privy Council. In 1892, the king issued a royal edict on the kingdom’s administrative reform, changing from the centuries-old Chatusadom system into modern ministerial system. The traditional hierarchy of provincial administration was replaced by the new Thesaphiban system, re-organizing provinces and tributary states into monthons, or administrative circles. Local administrative laws were also enacted, with Thesaphiban governors sent out through the centralized system beginning in 1894. Ancient corvée system and slavery were also abolished, giving full freedom to the entire nation. 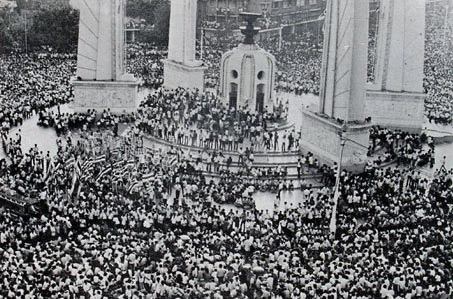 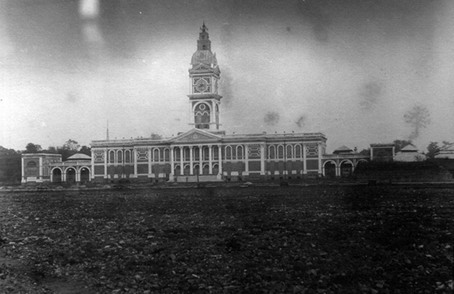 King Chulalongkorn also initiated major improvements in the kingdom’s laws and judiciary system. The Ministry of Justice was established, in order to modernize and standardize the kingdom’s legal and judiciary systems. Committees were created to revise and update laws. Modern Penal Code was promulgated, followed by others. The Law School was also established, in order to provide adequate supply of justices, barristers, and other legal staffs. All of these efforts led to the eventual abolition of traditional judiciary system, leading up to the demise of extra-territorial jurisdiction of European powers in Siam.

The King also took charge of the modernization of the army, following the European models. Modern military conscription replaced traditional corvée system, with the promulgation of the Military Conscription Act R.S. 124 in 1905. The Royal Military College was established, as well as the Naval College. Police and Provincial Gendarmerie were also established during his reign. 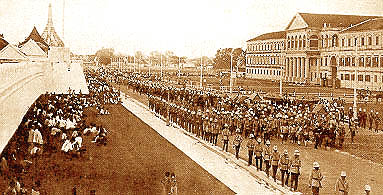 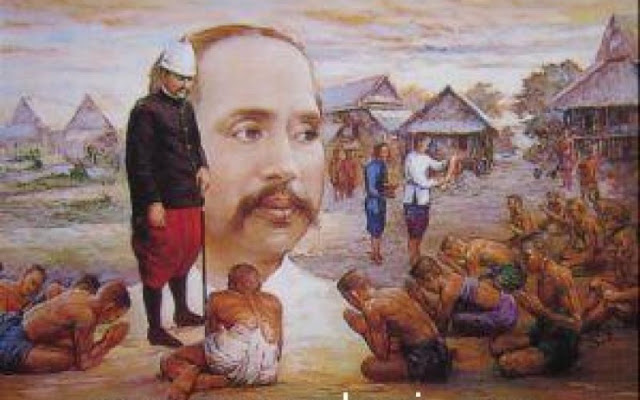 One of King Chulalongkorn’s major achievements was the abolition of slavery, which was carefully accomplished in three decades, from 1874 to 1905. The effort began with the royal decree dated August 21st, 1874, making anyone born into slavery after 1873 to be automatically freed from bondage when they turned twenty-one. The edict also prohibited the selling of anyone older than twenty into slaves. On April 1st, 1905, the king issued the Abolition of Slavery Act, R.S. 124, in effect liberating everyone who was born into slavery, and to reduce the price for slaves, therefore allowing further chance for slaves to be released from bondage. The same edict also prohibited any freed slave to return to slavery, and to control the price of slaves during transaction from one slave owner to another. The king also initiated a program to educate those who were born into slavery in both elementary and vocational education, in order to prepare them for life after being liberated. 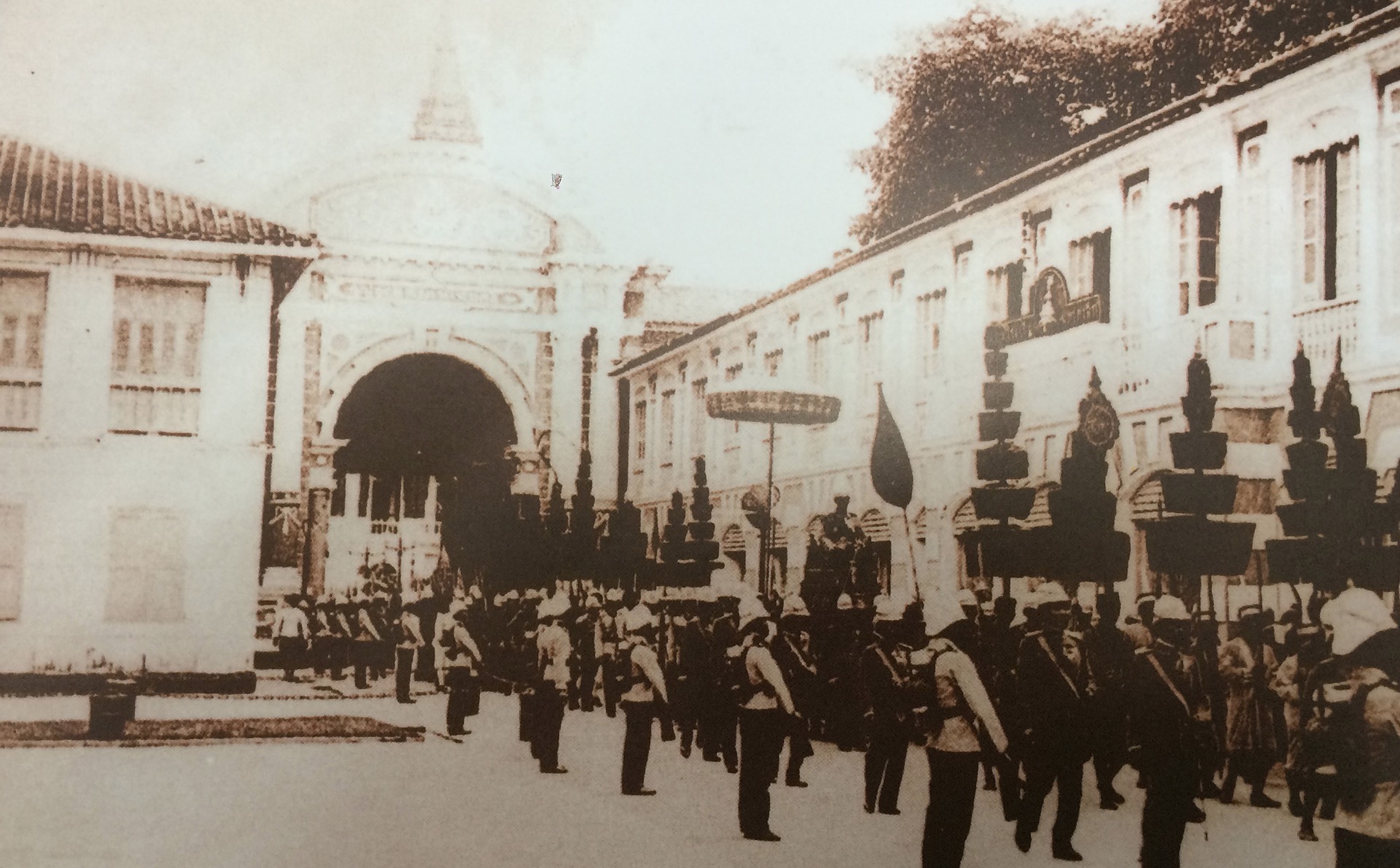 Fully aware of education as a key element in nation building, King Chulalongkorn gradually enlarged the education system to eventually serve every echelon of the society. After setting up a modern-style school at Phra Tamnak Suan Kulap in the Grand Palace, the king established schools for the people in Buddhist monasteries, the first of which was set up at Wat Mahannpharam in Bangkok. The Education Department was also established, and later incorporated into the Ministry of Public Instruction, to provide comprehensive administration over the kingdom’s educational system. The king also sent most of his sons to be educated in Europe, in order to be worldly, and to help promote Siam’s cordial relations with Western powers. For commoners, in 1897 the king established the royal scholarship, sending hundreds of smart Siamese to further their educations abroad.

After his 1892 administrative reform, King Chulalongkorn decided to modernize the Royal Pages Department, with the rationale that the modern state needs modern civil servants to run it in accordance with the needs of the modern times. Accordingly, on March 30th, 1898 the king issued a royal edict on the improvement of the Royal Pages Department, which began to set up a Civil Service College soon afterwards. The College was opened in 1899, and on April 1, 1902, it was renamed The Royal Pages School. After King Chulalongkorn’s demise in 1910, King Vajiravudh elevated the school into King Chulalongkorn’s Civil Service College, the kingdom’s first institute of higher education. The king also granted the use of 1,309 rais of the Privy Purse land in Pathumwan District, as well as 982,672.47 baht of fund left from the construction of King Chulalongkorn’s equestrian statue, in the construction and endowment of the new university. On March 26th, 1917, King Vajiravudh issued a royal edict elevating the status of the Civil Service into Chulalongkorn University, a lasting memorial to the beloved monarch, and the people’s contribution to the development of higher learning in Thailand. 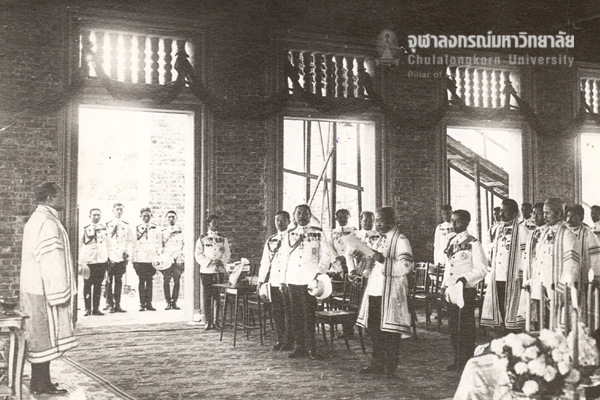 Since the beginning of his reign, King Chulalongkorn initiated the kingdom’s financial reform by establishing a new system of economy and taxation. In 1873 the Revenue Office was established as a part of the Royal Treasury Department. In 1892 the Department became the Ministry of Finance, which has since been in charge of the kingdom’s finance and taxation. Beginning in 1896, the annual state budget had been made, in order to maintain the balance between state revenue and expenditure, as well as the kingdom’s financial stability. The king also initiated the idea of separating state budget from the Privy Purse, thereby limiting his own spending power. As the kingdom’s financial activities had grown, the monetary system was modernized. Centuries-old silver bullet money was replaced by modern coins and banknotes, as well as the decimal system of money. Modern Siamese banking was also established through the opening of the “Book Club,” as an experiment in banking institution, which led to the foundation of Siam Commercial Bank in 1906. In addition, government bonds were also issued, in order to raise up capitals for the construction of modern infrastructures nationwide. 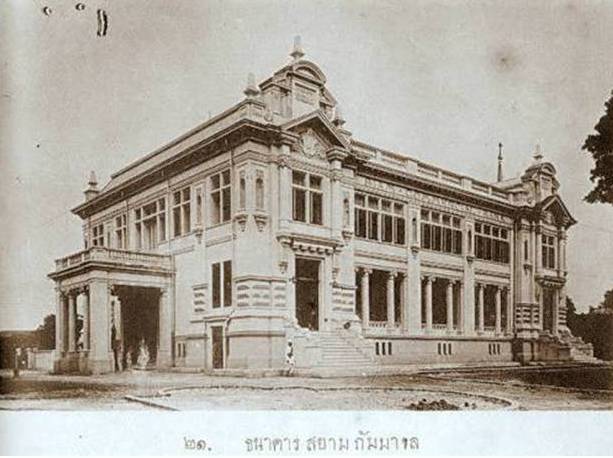 As Thailand’s economy was mainly based on agriculture, with rice as the main export, the expansion of cultivated lands and irrigation was very important. In order to develop modern agriculture, King Chulalongkorn gave great support to the construction of canals. The modern Ministry of Agriculture was established, together with schools for irrigation and agriculture. The Department of Canals was established, in order to develop Siam’s irrigation system. Land ownership, cadastral surveys, as well as title deeds were also modernized, leading to the nationwide cadastral surveys and the issue of title deeds. The Ministry of Agriculture was also in charge of forestry, mines, as well as silk.

King Chulalongkorn was also a man of the arts. He was particularly keen on several branches of art, including literature and photography. Always with a camera in his hands during his travels, the king took hundreds of photographs that had since become invaluable historical evidence, many of which with artistic merit. For literature, the king was a prolific writer as well as poet. With his deep understanding of poetry, he wrote various types of poems, as well as scripts for dramatic performances, as well as prose. He also had written many books on history, customs, and other subjects, many of which were highly and widely praised, and regarded as canonical in Thai literature. During his reign, the Vajiranana National Library was also established, together with the literary periodicals like Vajiranana, and Vajiranana Wiset. During the reign, the laws on copyrights were also enacted, for the first time in Thai history. 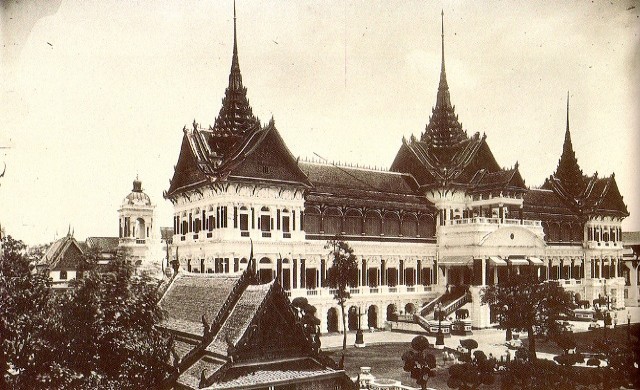 As the defender of faith, the king was the supreme patron of all religious faith in Siam. He built a number of Buddhist monasteries, including Wat Ratchabophit, Wat Dhebsirin, Wat Niwet Thammaprawat, and Wat Benchamabophit. In 1888 he convened the Grand Sangha Council to revise the Tripitaka scriptures, which were translated into Thai. 1,000 copies were printed. Known as Sayamrat Tripitaka, they were given to various Buddhist monasteries nationwide. In addition, in 1902 he promulgated the Sangha Administration Act, defining the Supreme Patriarch’s power as the administrator of the entire Sangha, as well as setting up the Sangha Council to govern the Sangha body. 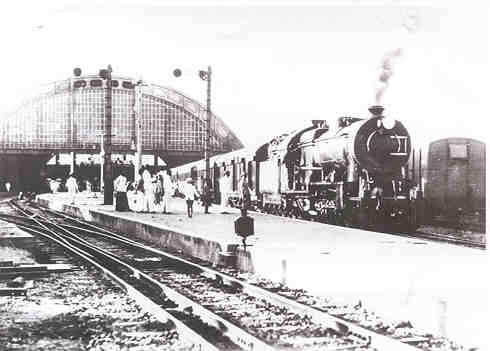 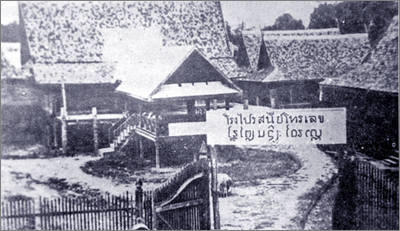 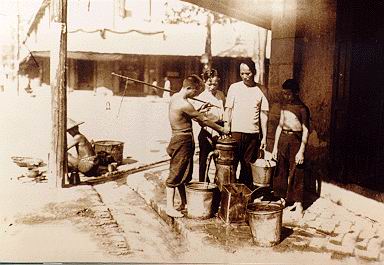 With the steady increase of vehicular traffic, numerous roads were constructed during King Chulalongkorn’s reign, including Ratchadamnoen Avenue, which connected the Grand Palace with Dusit Park Palace. Other major new roads include Phahurat and Yaowarat Roads. In addition, canals such as Khlong Premprachakorn and Khlong Prawet Burirom, were also constructed. From 1894 onward the king initiated the “Birthday Bridge” program, donating funds to build a new bridge as a gift to the city of Bangkok annually, marking his birthday. In 1887, tramway service for the city began, with the establishment of Siamese Tramway Co.

To connect Bangkok with the provinces, railways were constructed, beginning with the Khorat Railway (1890). During the reign, telecommunications were also vastly developed, with the 1883 establishment of the Department of Post and Telegraph. Soon, the kingdom began to have telegraphic, postal, and telephone services. Electricity and water supply were also begun during this reign. 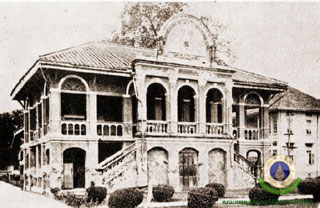 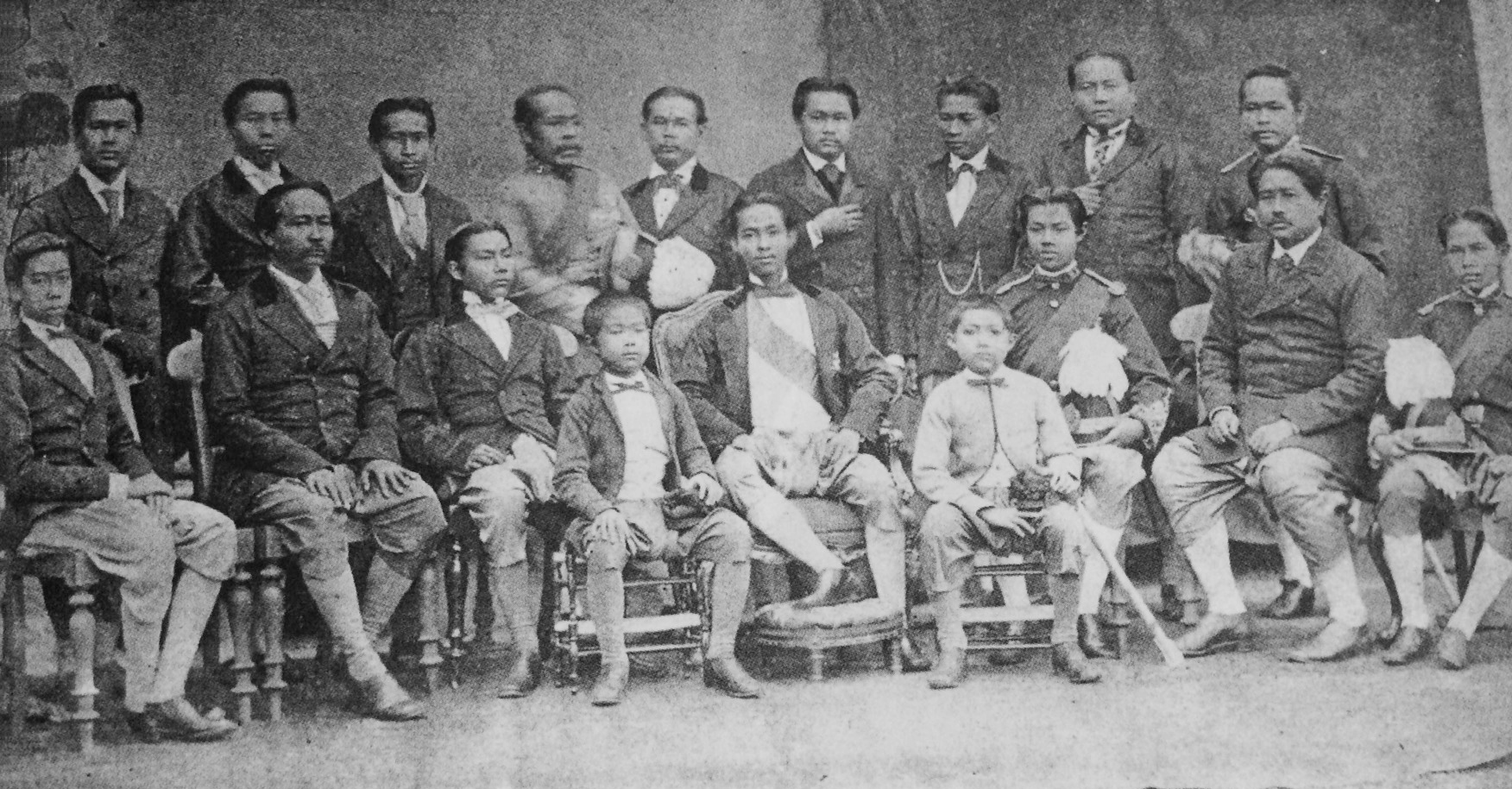 As for international relations, King Chulalongkorn was the first Chakri monarch to travel beyond the kingdom, as well as the first Asian monarch to travel to Europe. The journeys began with visits to neighboring countries like Malaya, Java, or India. In 1897 the king undertook his first trip to Europe, visiting 15 countries in total, in order to make Siam known to the civilized world, to strengthen the cordial relationship between Siam and European countries, and to relieve political tensions in Southeast Asia. In 1907 the king took another journey to Europe. Both trips had a profound impact on international relations, as well as providing the king with the first-hand experiences on how to run the kingdom in the modern world. 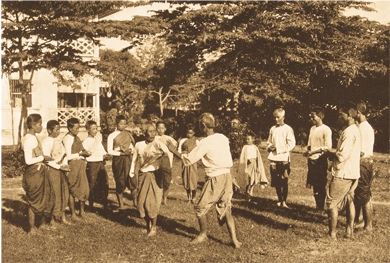 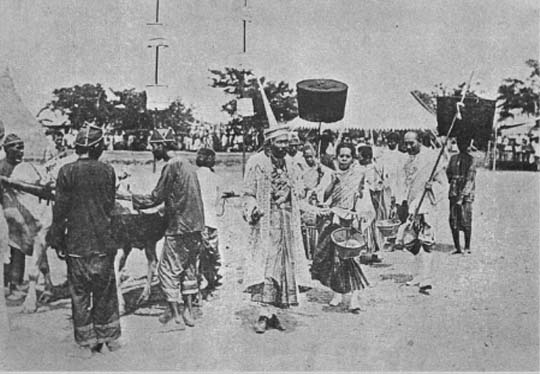 Since the beginning of his reign, King Chulalongkorn changed the mode of dress and hairstyle for the Siamese. The Mahatthai-style of hair for men was replaced by European hair styling. Traditional sompak cloth for court officials was replaced by pha muang, with matching long-sleeve shirts in the color of the ministries. Inspired by colonial civil uniform, Raj Patent jacket was invented for the modern government officials. Military uniforms were also modernized, with all military men wearing trousers. Women began to wear long hair, starting with the experiment initiated by Chaokhun Phra Prayurawong (Phae Bunnag), replacing the old-style peek hair style. During the 1873 Coronation, the king proclaimed the abolition of crouching on the floor in royal presence, having instead the courtiers standing or sitting on chairs, bowing to the monarch as a gesture of respect, in the European manner. For Thai-style audience, however, traditional mode of crouching was still observed.